As always, I've read everything and thank you it's all great feedback everyone.. Some comments tho I'm reading/digesting it all, I'm only commenting on a few things..

I'm going to try Pulse 4 to get an idea of it. But I am formulating how we can make a simpler "Pulse Mini". I also like @Oliver 's Blueprints idea. It echos a number of requests.

Funny, I have been trying to reconnect with the author of the Geographer template. Thanks, I love it when people share sites they made in Pulse.

While we are on it, what are your thoughts on creating an online version of Pulse? (Potentially different code base than Pulse Builder.)

The idea is, you can build something online quickly, either leave it there in production or run it on your own server. Existing Pulse subscribers get a certain number of free sites included. (And, as always, users can self-host for more.)

The aim here is that it's like an online builder, but you can take it onto your own server when more customization or price optimization is needed.

Strategy: I dont think we'll go punch-for-punch on every feature vs the major web builders.. Rather, our key is that its decently robust online. Plus, you can take it to your own server if you need more, rather than be "stuck"... And, it would, of course, support Blocs or Rapidweaver in the same capacity (with some work).

Online version? Maybe that could work. No point in trying to match Wix or Squarespace - those products are too big and established - and clunky - but they do work - unfortunately taking away some of our business

But if you are talking about something like Builder - but that actually worked as advertised, then that would be good. The way I work usually is to buy a cheap staging domain and put site together on it. But new ways of working are always woth considering.
Thanks

FYI to all on this thread.. The work is in progress. Main next deliverable will be a better, granular installer. This might take some time, but the coding is in progress. Once we nail the installer, hopefully it will be a pleasure to add the latest features without fear. There will also be numerous other bug fixes. While I hope it happens in much less time, for safety, I'd estimate 6 weeks- including the new default template. (Estimate only, don't hold me to it.

Thanks, its good to know whats going on

Hi all-
We are making progress... For the installer, we are offering 2 options to install for now:
a. Upload a ZIP.
b. Specify a path on the webserver. This lets you upload it via FTP (or however you prefer) and just type the file path.

Note: In the future we will have a 1-button update like WordPress. (You will be able to store a passkey for updates.) But this is coming later.

Anyhow, for (b), I'm wondering what the default path should be?
Options are:

The reason for each:
Option (1) It clearly indicates the path is changeable and should be changed to where you upload.
Option (2) Simplest option, and could be good if you're updating many installs. Imagine doing 5 updates.. No need to change the default path, just hit "Update". Downsides: We can't put a .htaccess file there, necessarily. Its up to the user; folder could end up as public read access (not a huge deal). Also, IIRC, the PHP may not have access to that path if there's virtualization?
Option (3) Upside: We can add proper .htaccess. We also know we can access the file. Might slightly annoy people who upload to root, or confuse beginners with a long path.

Here is the rough wireframe mockup of the feature: https://www.dropbox.com/s/sxmc1mhdyajtvut/Pulse%20Installer%20Path%20Option.pdf?dl=0

Hi Simonis.
Hi everybody.
It is good to hear such good news.

I have a few questions.
The current version of Pulse has several templates installed.
Blocks and pages can be deleted in the administration.
Then I delete the template via ftp.
My question is, will the template be deleted (without problems),
even from the pulsecore folder?
Maybe this is a new option for the administrator after saving the settings.

Question on Simonis.
What are the features of your upcoming template?
What templates will be supported?

My preliminary answer is:
"Added option for local path"

Create an option for a specific selection of updated features.
In the past, not every webmaster waited for updates.
He does not want to update his modified function.
He only wants to update a specific feature.
This also applies to the future.

I wish you much success.

Re: Templates- I think this is a separate question. Do you want to start a new, different forum thread on templates? I dont see problems with deleting the template in /template. Leave the pulsecore folder alone. Always try renaming before deleting, just in case.

Re: New Template support- There are no changes in template format. Existing templates will work. We are simply providing a nicer free template for those who want it. Both BS4 and BS5 are supported. (BS5 is newer but drops some old Microsoft browser support.)

I would build themes but I still can't see paying for something I didn't get the first time around.

Hi all-
The first beta will be available soon. Please message me directly if you'd like to get it.

This topic was automatically closed 14 days after the last reply. New replies are no longer allowed.

Hi all-
There's a lot of work left for the next release. Overall, my feeling was the beta was too far away from from what we need, so we'll likely release a new beta soon.

The code is thick but our team is getting there.

It seems our pretty new template did not render properly in many cases.

So, the good news is, we're adding more capabilities to make templating easier.

For {{navigation}}, you will soon be able to pass custom CSS classes for ul, li, a href as well as the general div. This works like a charm. I converted 2 free templates including working nav in about 7 mins each.

Of course, you're free to just use {{navigation}}. The extra parameters are optional.

It works since almost all template navs are similar to:

Of course, alternatively, you could "rejig" the CSS without this capability or edit navigation.phtml which changes core code, but its exhausting and often the CSS was generated using a tool, making it hard to keep consistent.

We have very far to go. But I'm happy with the progress so far.

For those curious, here are the 2 templates I customized with "native" PulseCMS nav in minutes. Notice the navigational styles are very different, but render correctly. 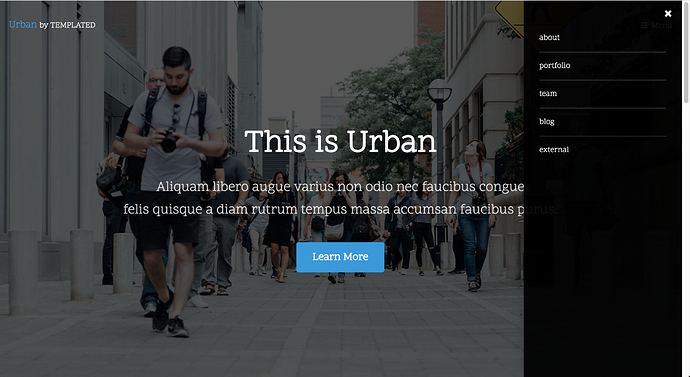 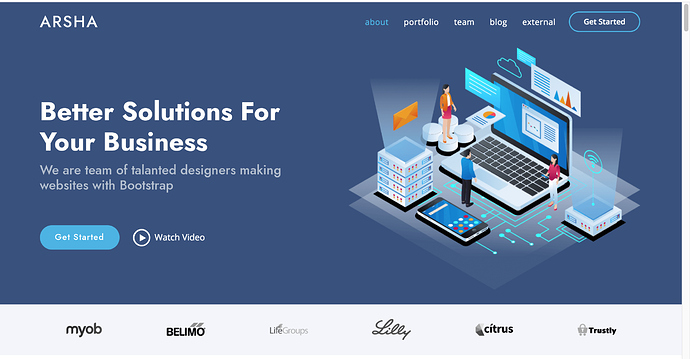 We are dead set towards our goal of making PulseCMS almost as easy to get a new site running as Wix- and over time- even easier.

This looks really nice. In that forked version of Pulse 4 where I added a menu data type I used template helpers to define IDs, classes and overall structure. Like Pulse's page templates I just used the name of the style in the menu short code;

If Pulse couldn't locate the menu files ('my-new-style' in this example) then it would roll back and use a default set of values.

I ended up doing this rather than adding the settings in the tag (as you've done) simply because I can bury these settings in Pulse and not have to expose my clients to too many options. Most struggle with a few options so giving then the chance to create a tangled mess wasn't something I really wanted to do!

I'd like to get on the beta testing bandwagon as I think I should have time over the Christmas break. Shall I send you a DM Simon?

That is an interesting approach. I'll consider that. It also would allow multiple menus.
Yes, please DM me.

The idea is that the menu is just like a page or block element and you can create as many as you like and apply them anywhere in the site. 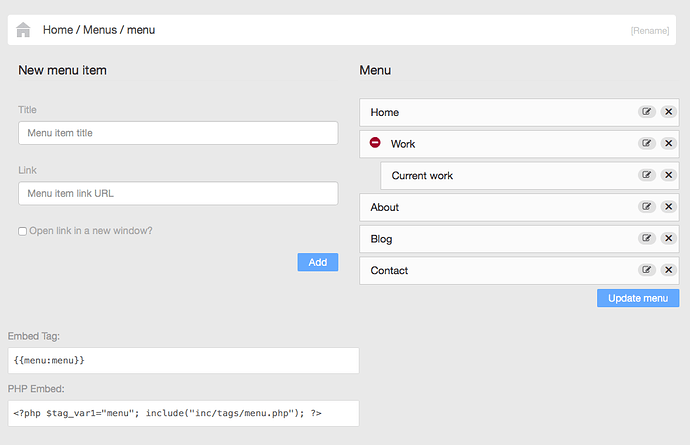 The UI for the menu editor is a little clunky but it allows me to add, edit, remove and reorder menu items. You add and edit the menu entries on the left and order and stack them on the right. I never got around to adding a dropdown for the menu styles which I guess would just list the styles found on the server.

If you want to see this in action I'll set up a test server for you and send you the login details. I'm happy to send you the forked CMS but I'd rather you didn't see the state of some of my code!

Looks promising. I'll talk to you about this over DM.

I'm updating this thread with progress.

We are in test, but it's not quite there yet-- we want this release to be perfect, and be a pleasant experience to upgrade to. The update is quite significant, but please hang in there.

Overall, this update "improves the guts" of PulseCMS, so that future updates will be easier.

Happy New Year to all!

Hi all, I am also confirming we will have an option for a "slim" Pulse build available within 3 months... You will have the option to download the full PulseCMS build or a "slim" build with rarely needed files removed... Things like FontAwesome, Readme.md files, test files will be removed.

I expect PulseCMS "slim" will at first focus on a basic Slim version by cutting out the obvious. Over time, I believe "slim" can get pretty small, to only the core files. More on this will be made available later.

We will maintain the option for a "full" download as default alongside "slim". Since some may want FontAwesome (without a CDN). Or, people sometimes want the full package for development or to use a rare plug-in.

It's taking longer to get this update done properly. So, I wanted to share screenshots so far. Again, the #1 hardest challenge was the Pulse Updater. Once its easy to update PulseCMS, all future upgrades will be a breeze to apply.

We fixed a number of compatibility bugs in the uploader. We also gave the option to specify a local path. This lets you upload via FTP and gets around any upload limitations set on PHP. 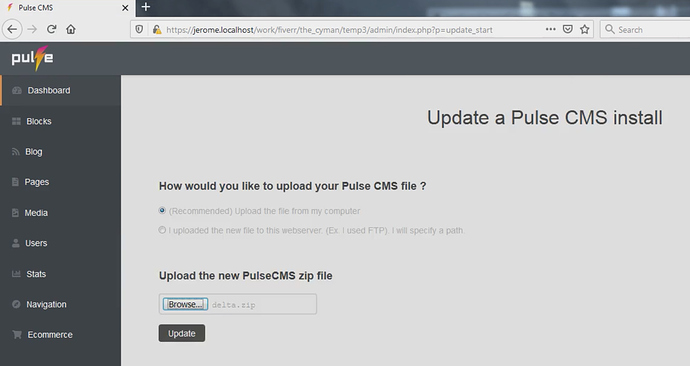 We know users customize PulseCMS. So we scan for changes based on checksum. That way, even if you customized a file which was updated, you have the option of skipping that file in the update. 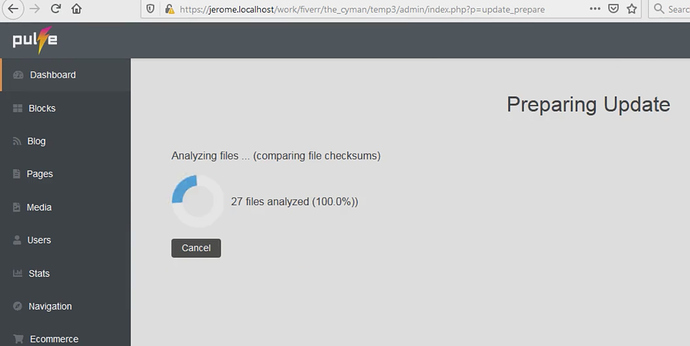 You can now review all changed files and only update those you want to update. 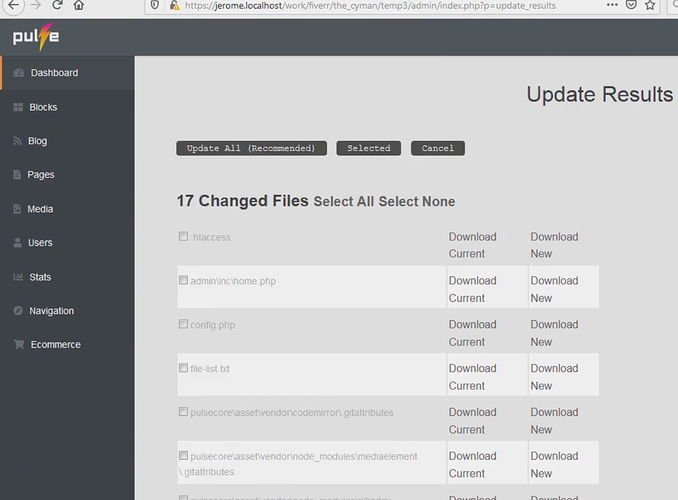 A special thanks to the many people who helped with development of the next version so far (Jerome et al).