Big problem with gallery admin on 4.7

I have been working on this staging site all week:

and was doing some final tweaks before going live with it. And I discovered a bug that manifested itself when I tried to reorder images in the gallery.
It would create a load of dummy image placeholders that could neither be displayed nor deleted.
At first I thought it was because I was using a plug in for the gallery - but I changed the page over to the standard Pulse one and same thing occurred. 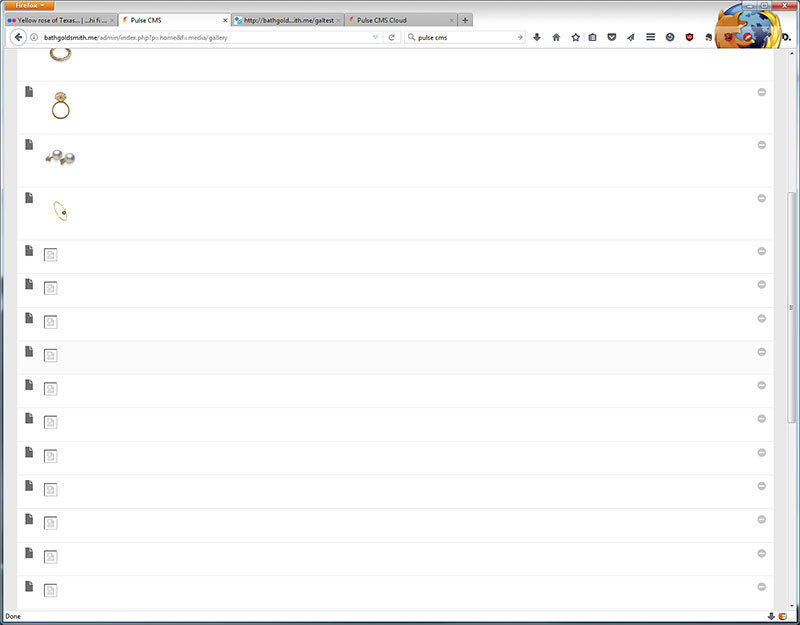 The only way I can fix this is to delete all images in content/media/galley with an FTP program and then upload all again.

Anyone have any ideas?
Thanks

Remove the “,” from file names. Maybe that causes the trouble.
Edit:
… and some images don’t have an extension e.g.
http://bathgoldsmith.me/content/media/gallery/Earrings,-18ct-with-Pink-Tourmaline-
“.jpg” missing

According to the source code to create a filter gallery.
I do not know this particular script.
Send me plugin = gallery.php.
I tried to help.
plugin(a)ivaro.euweb.cz

Try adjusting according to that model.

Hello,
Thanks for your input on this. I think it is sorted out. All files did have .jpg extensions, but I went through all the file names and edited them to make sure that they were okay. A couple had commas in, which I took out, and one in particular seemed to be the culprit and the cause had a ampersand & in the name - and I believe that was causing the issues.
I normally name files myself according to best practice but these were all given to me by someone else.
Hopefully its all cleared up now.
And I have no problem with the minimalistic isotope addon in Firefox - it seems fine. Thats what I am using here.
.