I created a new form using Just Forms and made a custom theme for the form with some fairly simple CSS.

When I use the embed tag (by adding {{justforms:27}} to a .txt file in my Pages) for my new form in Pulse CMS, the theme does not apply successfully. I am able to still update elements in the form as normal and those changes will take effect, but the theme is completely ignored.

However if I grab the js embed code for the form and paste that into my website, the form renders with the theme in place correctly. So it seems to be an issue with how Just Forms is integrated into Pulse CMS.

I’ve tried clearing cache of course but to no avail. I also created a new test form and applied the theme to it but that form wouldn’t accept the theme either.

I feel like this is a bug but maybe I’m overlooking something, if so I apologize and please move this to the Help category.

Hi @pyxal, do you have a live link?

Yes, you can see it here:
http://107.170.229.20/bayareacourtreporters/
Please mind the very basic layout. The client wanted me to take their (very old) existing website an give it a slightly more modern update while setting up a CMS.

Thanks for any help you can offer. I appreciate it. 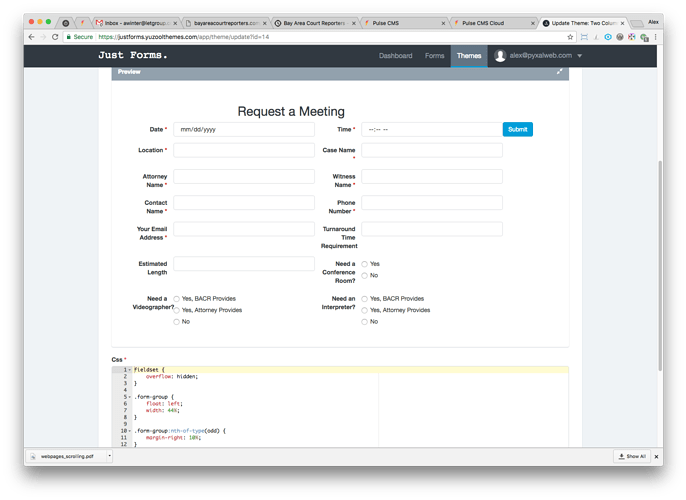 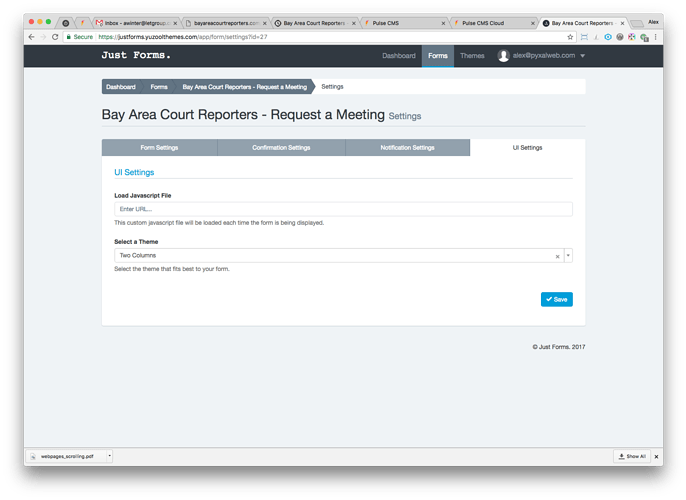 Is the Pulse team going to acknowledge this? It’s been well over 24 hours since my initial post and it indeed seems to be a bug. If it’s not a bug then it’d at least be helpful if they told me I’m the only one who has reported the issue, and that they can’t seem to reproduce the issue, and that it must be something wrong on my end.

To my knowledge, “justforms” jerry-built from the Yii framework and the need to pay.
Why not create your own forms = free google.
Here

Thanks for the suggestion but Google Forms doesn’t allow you to edit the form CSS. Apparently there are ways to do so but it’s currently just a hack.

I was getting close to moving on to Jotform or Wufoo, but don’t want to tack on another monthly bill for my client. Then I considered building the form in-house, as I do have some simple mail sending code and form validation code handy, but ugh… why reinvent the wheel at this point. I also don’t really like sending mail through my server if I can avoid it.

Anyway, I just went ahead and copied/pasted the Just Forms embed script and ditched the Pulse tag. I’m sure they’ll fix it some day. Or tell me that I’m nuts and this is an isolated issue

There are endless possibilities well. E.g.

Thanks @pyxal and glad you found a solution.

Yes you’re the first to have found this bug! It was a “bug” in the {{justforms}} tag. Well, I say a bug but that tag imports the form as a vanilla embed - without the styling. if you want to include the styling, embed the code from the Just Forms share button (which is just copy/paste like embedding a YouTube video as you’ve found